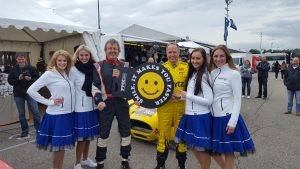 What a weekend we had at Hockenheim Historic. 2 series, 108 entries and only smiling faces. We had it all, sunshine, rain and beautifull cars with beautifull people around it. Yes this season opener is one to remember.

Hockenheim Historic 2019: what a party it was for the Colmore YTCC

Really, seldom we were so overwhelmed with compliments and happy faces during a race weekend as at this year’s Hockenheim Historic in memory of Jim Clark. With two grids of at least  50 cars each we never before we had such a big number of participants. Even better: our grids were the biggest ones of the whole event!  On Saturday evening we had a great barbeque and Grease party. On the music provided by DJ Ana Sonique there was a lot of fun, dancing, eating and drinking. Our big smiling boss Randall made a never-to-forget impression in his flashing yellow suit, proving the he really is the ultimate personification of fun on a racetrack. As a result of all this on Sunday our party was the talk of the town. Hockenheim Historic was a big challenge for us organizers, but we loved every second of it. A big thumbs up to all drivers, mechanics, family members and friends who made this wonderful event such a success.

The first Colmore YTCC event after a long winter saw a great variety of cars in 2 grids. In the Colmore / CSN Group YTCC grid we saw the big fast cars, with – as an experiment – 25 small Sports 2000 prototypes from Britain.  The grid of the Colmore YTCC consisted of the comparatively smaller and less powerful cars.  Each group had one qualification session and three races, bringing the presence of Colmore YTCC cars to 8 occasions on track.

In the Colmore / CSN Group YTCC series we on beforehand expected the Sports 2000 cars to be a good match for the Top Hat cars that are normally at the front of this series. We were right, although we underestimated the difficulties that the drivers in both types of cars experienced. Our philosophy “they can do it at Le Mans for 24 Hours in the rain and at night“ proved to be a bit different at the Hockenheim track. Sure, the lap times showed a great mix of the cars as a whole, with the small Sports prototype cars at the first rows of the starting grid. But during the race, especially in the rain, we encountered the visibility problems that the drivers had to cope with. In the big cars the drivers often had a lot of trouble in seeing the small cars, they got blue flags but could not see  for which cars. From the other side, the Sports prototype drivers were confronted with huge opponents, with a lot of spray on the wet track. Although the bigger cars were faster on the straights, the Sport prototypes had better handling in the corners and could brake later. The audience loved all this overtaking action, but a lot of drivers had their doubts. As some drivers of the bigger cars stated: “those humming bees seem to come out of the soil, you think that you are alone before a corner and suddenly there is a swarm of them all around you to pass you”. Let’s say that the mix of these two series was a great new experience for both classes. Later, when our drivers compete in the 24 Hours of Le Mans, they will be grateful that the Colmore YTCC has offered them their First mixed class experience…. As for the results, all 3 races of the CSN Group YTCC were won by a Sports prototype casr after severe and fair battles for victory. In race 1 and 2 victory went to Michael Gibbins in his MCR S2, race 3 saw Patrick Sharrington (MCR) on the top spot of the podium. Best Top Hat car in all three races was Christian Nowak (CN-Cobra) who finished 6th, 3rd and 4th overall and was 1st in Class 60B. Ronnie Scheer was in all races best in Class 70B with his glorious sounding beautiful BMW M1 (ex Nelson Piquet), meticulously prepared by Heup Motorsport. Swiss driver Samuel Benz was the winner in the 80B Class with his impressive 1989 TVR Tuscan.

In the Colmore YTCC series it was obvious that the Porsches would dominate. Not only there were a lot of them, they also were very fast, both in wet and dry conditions. The whole weekend we saw one of our youngest drivers, 22 year old Tijn Jillisen at the front of the field with his freshly blue painted Porsche 964. With pole position in qualifying, two race victories and a third spot he stood out above the other drivers. The three  podiums were completed by Peter Stox (Porsche 964 2nd in all 3 races), Marcel van Rijswick (Porsche 964, 1st in race 2, 3rd in race 3) and Eric den Dekker (Porsche 944 Turbo, 3rd in race 1), making it a demonstration of Porsche dominance. Only Gust van Haelst in his rotary-engined Mazda RX3 (5th in race 1) and the Alpine V6 GTA of Patrick Andriessen (6th in race 2, 5th in race 6) were able to split the Porsches in the top 10. In the midfield we saw great battles between the Scandinavian Ford Escorts, Ron Renes in the Lotus Sunbeam, several VW Golfs, an Opel Manta 400 and other popular touring cars of the seventies and eighties. In the end all competitors went home with a big smile on their face. That is what we intended, since our slogan is “Smile, it makes you faster”. And it worked. Next stop: Zandvoort, 17, 18 and 19 May. Come and smile with us.

Pictures in the Album from different photographers. Special thanks to Joost Rijkhoek.