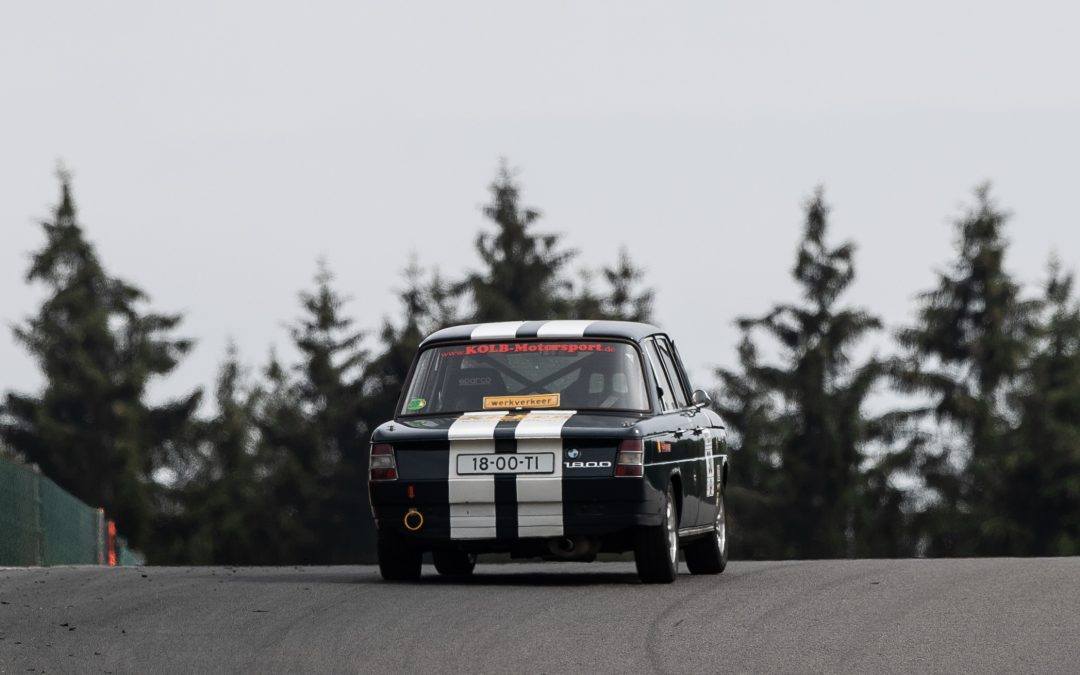 YTCC offers battle of the generations  at Spa

During  this edition of the Spa Summer Classic the YTCC starting grid was packed with the most diversity of  cars again. The variation was enormous: the small Trabants are traditionally always at the back of the grid, while the big guns occupy the front row rows. Big differences in the 66-car grid, where it is striking that the different classes are well mixed together in terms of lap times. On beforehand it was clear that the battle for the victory should go between two generations of drivers. On one side of the ring two old foxes, Peter Mucke (72 years old) in the Zakspeed Capri Turbo and special guest rider, former ETCC champion (1985 with a Volvo 240 Turbo) Gianfranco Brancatelli (68 years old), who took office with the Sierra RS500, the very same car with which he had won the 24 Hours of Spa-Francorchamps in 1989. On the other side of the ring two young dogs: Jan Bot Jr. (26 years) in the March-BMW M1 and Daniel Brown (26 years) in his fast Escort RS MkII.

During  qualifying all this seemed to be right. However, as outsider the Swiss Samuel Benz in his extremely powerful TVR Tuscan showed fast laptimes, which nestled him with a third time between Mucke (1st), Brown (2nd) and Bot (4th). And Brancatelli? He had a problem with his turbo. After one was killed in  free practice on Thursday,  in qualifying the new built-in turbo expired too, even before Brancatelli could have set a time. But now it was worse, because it was suspected that some of the missing  metal parts could have ended up in the engine itself. After consultation with the owner, it was decided not to take a risk and to load the car in the truck. The difference in lap times was vast, the fastest this time was again Peter Mucke, who put his beautiful Zakspeed Capri Turbo on pole with a time of 2.36.223, last on the grid would be local hero Bart Lemaire in the Trabant, who needed almost 6 minutes to walk around.. The calculators already saw that Bart would be lapped  after half a lap in the first lap …. That does not bother him, he is always there with his Trabant and can be proud of his list with legendary circuits where he has competed. Just like colleague Trabidriver  Albert Westerhuis, who has not missed a single  YTCC race right from the start. His qualifying time was 4.14.756, but yes, he drove on special tires and changed his (qualifying?) engine for another one after training. A piece of cake, by the way, with such a Trabant, which according to experts really offers a lot of driving pleasure.

Saturday morning, start of the first race, While the field enters the track in front op the old pits,  we miss Jan Bot on the second row. From La Source, where the cars have to come from the F1 pitboxes  we slowly see Brancatelli coming down in his Sierra RS500. When asked, the little Italian answered with his huge blue eyes: “I will drive this car in the race”. He has to start at the back, just like Jan Bot, who comes to roll up later, after a last minute technical problem had to be resolved. This means spectacle, these  two fast drivers at the back of the field. For security reasons, it is decided that they may still take place before the Trabants. After the rolling start, Mucke immediately takes the lead, with the fast Escort from Daniel Brown on his rear bumper. Brancatelli and Bot cut through the field like warm knives through the butter. Brancatelli is on spot 30 after the first round, after the second lap he is on spot 19, to finish fourth. Phenomenal: 61 cars overtaken in 12 laps !  Jan Bot performs almost  as well, bothered by his old tires, he finishes seventh. At the front Brown does not manage to stay attached to Muckes Capri, he is second on 1.15.747. Behind them Samuel Benz takes the third step of the podium, after an exciting and fair fight with the Porsche of Peter Stox, who himself drove a number of laps in third place. In the end Stox had to settle for the fifth place.

Race 2, Sunday morning. Due to the grid positions as the the result of race 1 now all the fast guys are at the front of the grid. Jan Bot had used a secret weapon: his mother. From the north of the Netherlands she came to Spa with new tires. If you know how big the tires of that March M1 are, then it must have been a very stuffy ride in her Fiat Panda. After the start, Mucke immediately took the lead again, Jan Bot moved in lap 1 from seven to two, while Brancatelli quickly scooped Daniel Brown and went to third place. While Mucke and Bot disappeared like on a string, Brown lashed long on the Sierra of Brancatelli as if the Sierra were magnetic, the two gave each other nothing. Towards Eau Rouge you could hear the Sierra going down the straight at the speed limiter, both men went without  braking full throttle  through Eau Rouge, some laps even in well-managed four-wheel drifts, what a spectacle. In the ninth lap we saw Mucke fall back, Jan Bot took the lead, while in the penultimate lap Brancatelli also passed Mucke, Daniel Brown eventually took third place in the final lap. In retrospect, a faulty waste gate was the cause of Mucke’s decline, who incidentally set the fastest time of the entire event in this race: 2.32.695.

Race 3 was a repeat of race 2, only the Zakspeed Capri was missing on the grid. The podium had the same line-up as after race 2, after another breath-taking battle between Brancatelli and Brown. Samuel Benz and Peter Stox were not far behind the leading trio and experienced together again a beautiful battle that lasted the full 12 rounds. Just like in the first two races, several groups of 3-4 cars battled  throughout the race. This was done with respect for each other’s material, the YTCC was the only series where the safety car did not have to be used once.

But what about Brancatelli? That is a beautiful story. The 24 Hour of Spa winning Ford Sierra RS500 was sailed from New Zealand to Europe to participate in a number of historic  events. Gianfranco Brancatelli came over from Brazil, because he wanted to drive his old car again, especially at Spa-Francorchamps. The car had driven on the Nurburgring shortly before and participation in Silverstone Classic was also on the program. That the race at Spa could would not take place because of a broken turbo was unacceptable for Brancatelli. That’s why he called his old mechanics for help. These old specialists, the mechanics of the Eggenberger team who built and ran the car in 1989, could not abandon their old comrade and drove directly from Switzerland to Spa. They built the engine at night, disassembled it, checked everything, reassembled it, mounted the new turbo that had been brought in and started the engine half an hour before the start of the race. It is nice that these old hands caused Brancatelli to participate in the races despite the misery in practice. And that they still had all their skills present was proven  by the speed that the small Italian pulled out of the car. It was obvious l that these mechanics were allowed to stand on the podium with Gianfranco to share his success. What a camaraderie! Brancatelli got a trophy from the YTCC organization on Sunday afternoon, which he had never won in his long career: the “Biggest Smile on Face Award”. Together with the “Most Fun on Track Award” a unique trophy that every YTCC driver really wants in his trophy cabinet. Another  proof of how beautiful historic motorsport can be, it is not only the cars, but especially the people who enjoy it with so much pleasure.

Look at our “Album” from Spa and if you where not there you can see what you missed. Click on the pictures and they will be bigger and you can download them.